Paris Agreement entered into force, it is time to act

Today, the international Paris Agreement enters into force.It is the first multilateral and binding agreement for controlling dangerous climate change. To mark the entry into force, the Tallinn TV Towerwill be lit up green.

“It is great that the entry into force of the Paris Agreement was achieved so quickly but it is clear that the entry into force alone is not enough, actions are needed as well. People’s contribution to climate change is remarkable and increasing in time as a result of the constantly growing population and consumption. All of us – enterprises, as well as regular people–must change our attitudes and switch to environmentally friendlier economic and behavioural models,”said Marko Pomerants, Minister of the Environment.

The long-term objective of Estonia is to switch over to a low carbon emission economy, which means targeted stage-by-stage restructuring of the economic and energy systems to make them more resource-efficient, productive, and environmentally friendly. This entails changes in energy production, transport, forestry, and agriculture, as well as in the everyday habits of people.

“Transition to a new way of thinking does not have to be easybut in the end, everyone will benefit. The environment will be cleaner and people thereby healthier;resources will be used more sensibly and new solutions will be making people’s lives more convenient. The inhabitants of planet Earthneed to realise that resources are limited and the current lifestyle of wasteful spending must end,”Pomerants explained. 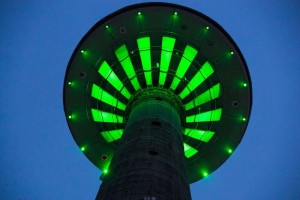 The Paris Agreement concluded last December in Paris with the participation of 195 countries is the first multilateral agreement dealing with climate change, which concerns the greenhouse gas emissions of almost the entire world (incl. China, the United States, Russia). The main objective of the agreement is to keep the rise of the average global temperature considerably lower than 2°C in the longer perspective (compared to the pre-industrial revolution era) and thereby control dangerous climate changes. Among other things, the Paris Agreement sets binding target levels and a reporting system for decreasing greenhouse gas emissions, establishes a dynamic mechanism for the assessment and increase of the undertaken obligations in time, funding activities related to climate change, and a long-term adjustment plan related to climate change.