Exhibition “No Bananas. A Time Travel to the Soviet Everyday Life” opened at the Tallinn TV Tower

An exhibition is opened on Friday 28 April at the Tallinn TV Tower, titled “No Bananas. A Time Travel to the Soviet Everyday Life” and illustrating the paradoxical nature of the Soviet era.

The exhibition is based on stories collected by many individuals, among them actors Erki Laur and Tarmo Männart. Besides numerous interesting objects, a realistic replica of an average Estonian apartment in the 70-80s style has been created specifically for the exhibition.

Those who remember that period can recall the absurdity of it, for the younger people it is something totally exotic. Foreigners without any nostalgic connection to the Soviet era get a chance of a glimpse into the everyday life of people on the other side of the Iron Curtain. Visitors can explore the period by following different routes.

The instigators of the idea of the exhibition summarize its concept as follows: “We focus on the 70-80s. By that time, Soviet people had adapted to the system they were forced to live in. They had devised ways to live and manage as comfortably as possible. They were ingenious, creative and smart. The lack of goods in shops didn’t necessarily mean that the homes lacked them. Things were DIY’d if necessary. Coping within the system entailed a certain amount of absurdity. This is the aspect that interests us.”

Production designer Katrin Sipelgas, one of the curators of the exhibition, adds: ”During the last four years, I have worked on two films set in the 80s. It seems it’s time to start looking back. It’s getting harder and harder to find props for that period – this exhibition also serves the purpose of collecting and preserving objects that often are moved from the family home to the summer house and end up in a bonfire there.”

“The roots of the Tallinn TV Tower lie deep in the Soviet era and even the completion of this grand structure required the ingenuity and initiative of many people. We believe that this exhibition offers a good opportunity of discussion between different generations, as well as the uplifting insight that today’s Estonia is a much nicer place to live,” Riina Roosipuu, the manager of the TV Tower, explains the kinship between the TV Tower and the exhibition.

The exhibition „No Bananas. A Time Travel to the Soviet Everyday Life” will be open at the TV Tower until 30 September 2017. Visitors can choose between exhibition-only tickets and adding a visit to the viewing platform of the TV Tower. Special guided tours and exhibition-related educational programmes for schools are also provided. Read more on the website of the Tallinn TV Tower

The renovated TV Tower was opened again on 4 April 2012. The Tallinn TV Tower is a member of the World Federation of Great Towers (WFTG) among the highest structures of the world. 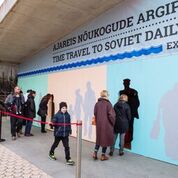 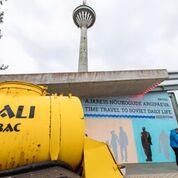