Tallinna Teletorn > About us > Mascot ETI

THE TV TOWER’S MASCOT IS ETI 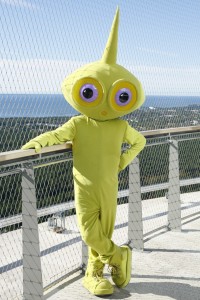 After a long and busy summer of 2012, the extraterrestrial creature who symbolizes Tallinn TV Tower finally settled on a name after a visitor survey – ETI.

ETI had the following to say about the choice of name: “It took all summer for me to choose my name. It wasn’t easy because here on Earth, parents give kids their names, but I had to find the right one out of thousands of options.”

“I sounded out all kinds of possibilities in my head, how would it sound if I was called such-and-such or some other name. ETI stood out because it had many meanings. First, it explains where I come from in English – extraterrestrial intelligence. Second, it is like an abbreviation that could stand for a number of other things like Estonian Television Icon or Extraordinary TV Tower Individual. In addition to all of the above, my great new name is also internationally accessible, as I meet people at the Tower from all over the world.

In 2014, an ETI children’s programme was held outside the TV Tower.

The TV Tower mascot ETI has become the symbol of children’s sports competitions.